The Fredericton Region (Zone 3) will revert to the orange phase at midnight on Thursday evening, joining the Saint John and Moncton regions in the more restrictive phase of the COVID-19 recovery.

"We need concerted action and we need it now," said Dr. Jennifer Russell, noting that there have been several new cases and cases of interactions at large gatherings.

All other health zones are in the yellow phase.

Russell said the move to orange was recommended because of the high levels of social interactions and attitudes, multiple exposure including schools, pubs, gyms, health facilities and sports clubs, and the "significant" population interaction between the Fredericton area and the other two regions these are already in the orange phase.

"COVID-19 remains present here and in the rest of the Atlantic provinces," said Russell. "w is not the time for larger social gatherings … To make the orange zones yellow again for Christmas, we don't need to reduce essential activities as much as possible."

Russell also announced twelve new cases on Thursday in New Brunswick, including eight in the Saint John area, three in the Fredericton area, and one in the Moncton area:

All cases are self-isolating and are being investigated. 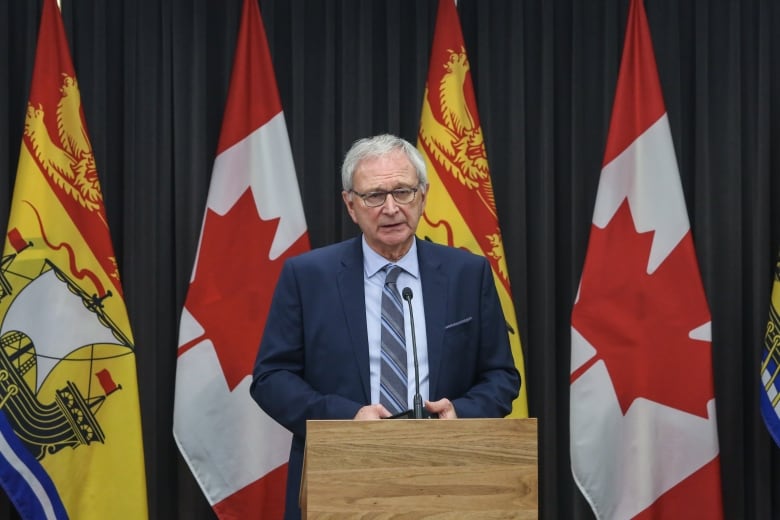 Prime Minister Blaine Higgs said he would speak to Prime Minister Justin Trudeau about vaccines and possibly a schedule for their introduction Thursday night. (Submitted by the New Brunswick Government)

He said he hoped to get some information on when the first vaccines might be available.

"I think what we're going to get tonight is a discussion of the overall rollout criteria … and how they're managed on a per capita basis," Higgs said at the COVID-19 briefing on Thursday.

"I would like to believe that in the coming months, maybe the first quarter of this year, we would be able to roll out a vaccine, but I am unable to verify this and I hope for good news in this regard tonight. "

Horizon asks retirees and students to help with outbreak

The Horizon Health Network has called on volunteers to help with the COVID-19 outbreak "if necessary".

In an email to CBC News Thursday, Horizon said it had "identified an urgent need for staff at Saint John Regional Hospital as well as our assessment centers in Saint John and Fredericton."

"For this reason, Horizon is asking its clinical and non-clinical staff to be interested in volunteering for a 15-day assignment at any of these facilities," said Maura McKinnon, chief human resource officer, in the email.

Horizon is also looking for students, retirees, and members of its community to help with the outbreak if needed, McKinnon said. She did not specify what tasks to help with.

"We are taking on new employees through our accelerated process and are expected to take on 20 additional employees today."

Higgs says "the threat is real," urges patience and diligence

He highlighted concerns about bars and "the younger population" and urged them to follow health rules in order for businesses to operate.

"At this point in time, the community has not confirmed the broadcast, but the threat is real. So we are taking action now," by moving the Fredericton area back to the orange phase.

Higgs also noted that at midnight Thursday night, "anyone returning to New Brunswick from anywhere must self-isolate for 14 days".

The Prime Minister also noted that enforcement efforts to date have resulted in 71 fines and 140 tickets for violations.

"I know peace officials aren't easy to deal with, but it's all for our own good," he said.

COVID is forcing the curtain to open on the virtual stage

The Capitol Theater in Moncton insists the show must go despite COVID-19.

Some of these appearances include A Down Home Christmas with Tomate / Tomato and ël with Les Muses next month.

The Capitol is working with three other theaters in the province to present four solo performances at the same time in the New Year.

The partnership exists with the University of Moncton, the Monument Lefebvre Theater and the Dieppe Arts and Culture Center in collaboration with Coup de cœur francophone.

New Brunswick Public Health has warned of the following possible exposures to COVID-19 in Moncton and Saint John, including gyms, shops, bars, restaurants, and on flights.

Anyone who has visited these places during the stated times should self-monitor for symptoms for 14 days.

Anyone developing COVID-19 symptoms should self-isolate and do the self-assessment online to schedule a test.

Public health has found a positive case in one traveler who may have been contagious vember 19th on these flights:

What to do if you have a symptom

People who fear having COVID-19 symptoms can take a self-assessment test online.

According to Public Health, symptoms of people with COVID-19 include:

Symptoms in children also included purple markings on their fingers and toes.

People with any of these symptoms should: