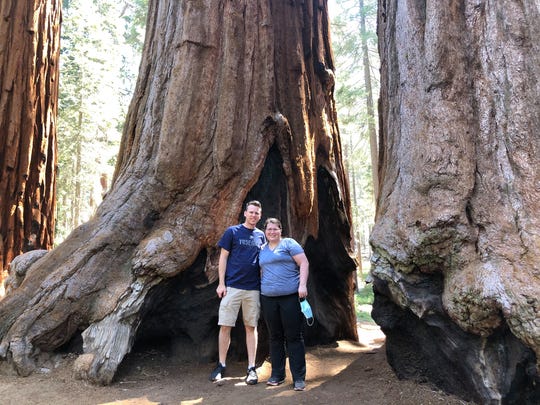 Lance and Lauren Hicks traveled to California by train this summer. They want to travel as much as possible while Lauren is comfortable and able to hike. (Photo: Submitted by Lauren Hicks)

Just last year, Lauren Hicks graduated from MSU and OTC college with a 4.0 grade point average and dreams of becoming a doctor.

She had almost 100 hours of doctor shadow under her belt. The day before the Medical College Admission Test (MCAT), Hicks developed severe abdominal pain.

The otherwise healthy 29-year-old told herself it was likely an ulcer and tried to ignore the pain.

"I gave it six weeks to see if it was an ulcer. It didn't go away," she said. "I had a CT scan in the emergency room and it showed that my liver was actually full of lesions and then there was a mass in my left breast."

When the ambulance tried to explain what he saw on the scan, Hicks said she didn't believe what he was saying.

While she can laugh about how silly she might have sounded to the ambulance, Hicks doesn't find much humor in her diagnosis: metastatic stage 4 breast cancer.

"I don't think I initially understood exactly what level 4 meant. I mean, you know from a knowledge and education sense," Hicks said. "But whenever you're diagnosed, it's like a separation between knowing what it is and what you actually have."

With October being Breast Cancer Awareness Month and pink ribbons seemingly everywhere, Hicks – like many women with stage 4 metastatic breast cancer – finds all the "Save the Ta-Tas" and "Fight Like a Girl" news frustrating .

"My number one favorite animal is the message that is communicated with breast cancer awareness, just the cute slogans like 'save the boobies', 'save the ta-tas', '' ; Save the second base, '"Hicks said. "There are women, there are people behind these Ta-Tas, behind these fools. It's about life. It's about careers."

bless you: "I was scared": the 20-year-old shares details of the struggle and long-term recovery from COVID-19

In her view, these types of slogans create the impression that breast cancer is all about "just saving the breasts" and that "fights like a girl are pretty, like the color pink".

Today, at the age of 31, she responds well to treatment and feels and looks good. She said that people often tell her that she doesn't look like she has cancer or they assume she can have a mastectomy, undergo chemotherapy, and be fine.

"People (tell) me, 'My grandma had breast cancer 20 years ago and is fine. You will be fine too,'" Hicks said. "I don't fit the image of a cancer patient. And a lot of women and men in stage 4 don't do this because the treatment is easier, because the goal is not the cure. It's just about making your life longer."

"There is a lot of information missing about Phase 4, and I think that's because companies just don't like to talk about it."

Hicks said she found a lot of information and support from an organization called METAvivor.

According to METAvivor.org, only 2-5 percent of breast cancer research funding is for metastatic breast cancer or finding solutions to extend the life of MBC patients. METAvivor advocates "postponing the public discussion and taking immediate action".

Hicks wants to encourage women 40 and older to get their annual mammograms.

"There are a lot of women who, like me, are diagnosed at 29. I wasn't the age to get a mammogram," she said. "They don't do mammograms with us. So if your doctor has told you to have a mammogram, at least do so for us who had no chance of being diagnosed at an earlier stage."

She also wants young women to be aware that they can also develop breast cancer and to talk to their doctor about early detection.

"Do your own breast exams. See a doctor at least once a year for a clinical breast exam. Then a doctor will do a breast exam," Hicks said. "Ask your family if you have a family history and share this with your doctor as this may change if they want to start the mammogram."

Unlike a paternal grandmother, Hicks said she had no family history. However, as a teenager she had leukemia. Her oncologist believes she had leukemia as a child and may have played a role in the development of metastatic breast cancer.

Hicks had genetic tests soon after she was diagnosed with breast cancer. They looked at genes that can increase breast cancer risk, as well as cancer risk in general, since this was their second diagnosis of cancer before the age of 30. Her genetic tests were negative and were considered normal.

"That was a relief because if I had a gene that made me more prone to cancer, my brothers could have had the gene too," she wrote in an email. "I'm glad you don't have to worry that you are at increased risk of cancer."

She has pushed her plans to become a doctor into the background and instead tries to travel as much as possible.

Because she responds so well to her first line of treatment, she and her husband Lance bought an RV so they can continue camping and hiking while she can.

Lauren Hicks at the Sentinel Dome in California this summer. (Photo: Submitted by Lauren Hicks)

At home, she regularly uses a treadmill to maintain strength and endurance while hiking.

"We camped a lot in Arkansas," she said. "We did three- and four-mile hikes. I just want to keep doing this as long as possible."

She wanted to travel this year, but 2020 had other plans.

"We were able to go to Orlando in January, and I went to New Orleans with my best friend in February," she said. "And then COVID. We had to cancel several trips."

"I hope a vaccine comes out or something so we can travel again," she said. "I don't want to spend the rest of my good days in my house."

The 10 Greatest Treadmills for Your House Fitness center In accordance with a Coach – LIVESTRONG.COM